The birth of Jesus was good news! Jesus was not an ordinary baby. He is God’s Son, sent to earth from heaven. Jesus, the promised Savior, came into the world to deliver us from sin and death.

Zechariah and his wife, Elizabeth, were old and had no children. They lived outside of Jerusalem in the hill country and did what was right. Zechariah was a priest and at that time, King Herod ruled over Judea. Twice a year, Zechariah went to the temple in Jerusalem to carry out his duties as a priest.

“Do not be afraid, Zechariah,” the angel said. “God heard your prayer. Your wife will have a son, and you will name him John. His birth will bring you joy. God will be with Him. The Holy Spirit will fill him even before he is born.”

The angel said that John would help many people turn back to God. John would go ahead of the Lord and get people ready for His coming.

Zechariah asked the angel, “How can I know this will happen? I’m old, and my wife is old.”

The angel said, “God sent me to tell you this good news. Because you did not believe my words, you won’t be able to speak until these things happen.”

Zechariah left the temple. The people outside realized he had seen a vision and could not talk. When he was done serving in Jerusalem, Zechariah went home to Elizabeth. In time, she became pregnant and gave birth to a son. Her neighbors and relatives rejoiced.

Zechariah and Elizabeth named their son John. Suddenly, Zechariah could speak again. He began praising God. The people who lived nearby could tell that God was with John. The Holy Spirit filled John. Zechariah praised God and told the people God’s words: “God has come to help His people. He will save us through David’s family. He will rescue us from our enemies.” Then he spoke to John: “And you will be called a prophet of the Most High. You will go before the Lord to prepare the way for Him.”

The time had come. God was going to bring His light into the darkness of the world. Peace was coming for God’s people.

John grew up and lived in the wilderness until God called him to get the people ready for Jesus.

When Zechariah believed God’s word, he praised God. John was born to prepare the way for Jesus. John would point people to Jesus, and they would praise God for keeping His promise to send the Savior.

Hang a length of string or twine across your room where kids can reach it. Write each word or phrase of the key passage on a separate clothespin and put the clothespins in a jar. Take turns drawing a clothespin and placing it on the string in the correct order. When your family is finished drawing clothespins and ordering the verses, say them multiple times together.

Say • John was one of Jesus’ closest friends and disciples. He wrote the Book of John and started it all out by explaining who Jesus is. Jesus is God the Son and was with God the Father and God the Holy Spirit even at the very beginning. Though Jesus wasn’t born as a human until many years after creation, He has always existed. Is Jesus God or a human? As the Son of God, Jesus is both fully God and fully human. 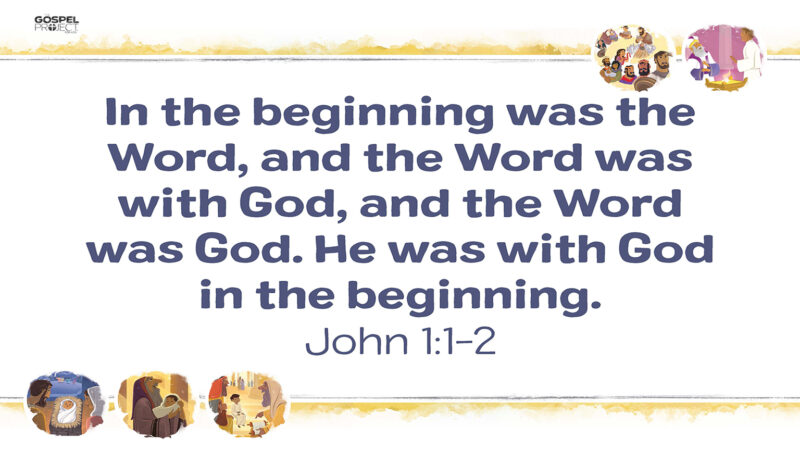 In English the phrase ‘keeping mum’ means to not say, to keep the secret. Just like Zachariah was not a loud to talk in our story, in this game you need to try to describe a bible character without mentioning their name but by giving clues about the person. (make it harder – you can’t refer directly to them either) One example is: Peter – those people who hung out with Jesus all the time, a crow making lots of noise 3 times, Prisoners released by an Angel…

Think of different bible characters from both the Old and New Testament. – Resource