Jesus showed His disciples with the bread and the drink that He is the true Passover Lamb. God’s people had broken the old covenant, and God promised to make a new covenant to forgive sins. The new covenant says that everyone who turns away from sin and trusts in Jesus’ death and resurrection will be forgiven of his sins and will have eternal life.

This Week’s Lesson: Jesus Was Arrested

Jesus and His disciples went to a garden to pray. Jesus told eight of His disciples to stay at the garden gate. Three of the disciples went into the garden with Jesus. He told them, “Sit here while I go over there and pray.” Jesus was very sad. He fell facedown and prayed. “Father! If it is possible, do not let this happen. But I want to do Your plan.” Jesus went back to His disciples, but they were sleeping. “Couldn’t you stay awake with Me for one hour?” He asked Peter. Jesus left again to pray. He came back and His disciples were sleeping again. “Get up,” Jesus said. “It is almost time.” Jesus knew it was time for Him to do God’s plan to rescue people from sin. All of a sudden, another disciple—Judas—came into the garden. A large crowd was with him, and the people carried swords and clubs. Judas kissed Jesus so the crowd would know which man was Jesus. The people in the crowd grabbed Jesus to arrest Him. Peter pulled out his sword to fight the crowd, but Jesus told him to stop. Then Jesus said, “This is happening just like God said.” Jesus’ disciples all left, but Peter stood back to watch what was happening. The crowd led Jesus away to the high priest. The religious leaders wanted to find a reason to kill Jesus, but Jesus had done nothing wrong. The high priest asked Jesus, “Do You have anything to say? Are You the Messiah, God’s Son?” Jesus said, “Yes, that’s right.” The high priest and the religious leaders did not want to believe that Jesus was telling the truth, so they said He was lying. They said He deserved to die. As Peter watched, a servant came up to him. “Aren’t you one of Jesus’ friends?” he asked. But Peter said, “No! I’m not!” Two more times, people asked Peter if he was Jesus’ friend. Peter lied. “No!” he said. “I don’t even know Him!” The next morning, the religious leaders made a plan to kill Jesus and took Him away to Pilate, the governor.

Christ Connection: Jesus knew God’s plan was for Him to die to rescue people from sin. Jesus’ friends left Him and He was arrested, but Jesus did not fight back. He wanted to do His Father’s plan no matter what. 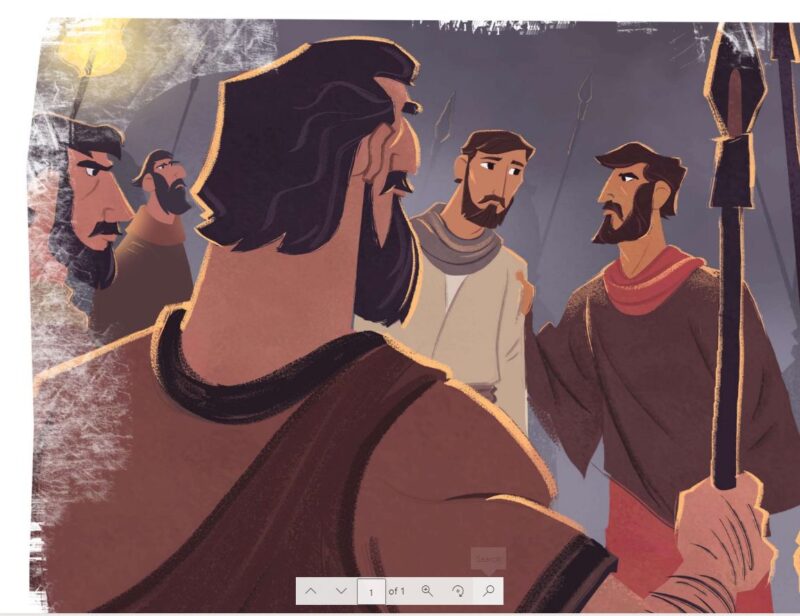