The man at the pool was unable to help himself. Jesus healed him, and he obeyed Jesus’ commands. In a similar way, we are unable to free ourselves from sin. Jesus calls us to trust in Him. When we trust in Jesus, He frees us from the power of sin and death so we can follow Him and obey Him.

This Week’s Lesson: Jesus Healed a Man Who Was Lame

Jesus went to Jerusalem and stood by a pool called Bethesda (buh THEZ duh). Many sick people were lying by the pool. Some could not see, others could not walk, and some were paralyzed. Jesus saw a man who could not walk. The man had been there a long time. Jesus asked him, “Do you want to get well?” The man answered, “Sir, I have no one to put me in the pool when the water is stirred up. Someone else always gets in before me.” The man thought if he could get into the water, he would be able to walk again. Jesus said, “Get up, pick up your mat, and walk.” Right away, the man was healed. He picked up his mat and started to walk. This happened on the Sabbath, so the Jews told the man who was healed, “It is against the law to pick up your mat on the Sabbath.” The man said, “The man who healed me told me to pick up my mat and walk.”“ Who was the man?” the Jews asked. But the man who was healed did not know who had healed him. By this time, Jesus had slipped away into the crowd. Later, Jesus found the healed man in the temple area. Jesus said to him, “See, you are healed. Now stop sinning so that something worse doesn’t happen to you.” The man went to tell the Jews that Jesus had healed him. So the Jews tried to stop Jesus because He was healing people on the Sabbath. Jesus told them, “My Father is always working, so I am working too.” Now the Jews hated Jesus even more. Not only did He break their rule about not working on the Sabbath, He was saying that He is God’s Son. Jesus is God’s Son, and He always did what God said was right.

Christ Connection: The man at the pool needed help. Jesus healed him, and he obeyed Jesus. In a similar way, we are sinners who need Jesus’ help. Jesus wants us to trust in Him. Jesus can free us from sin so we can follow Him and obey Him. 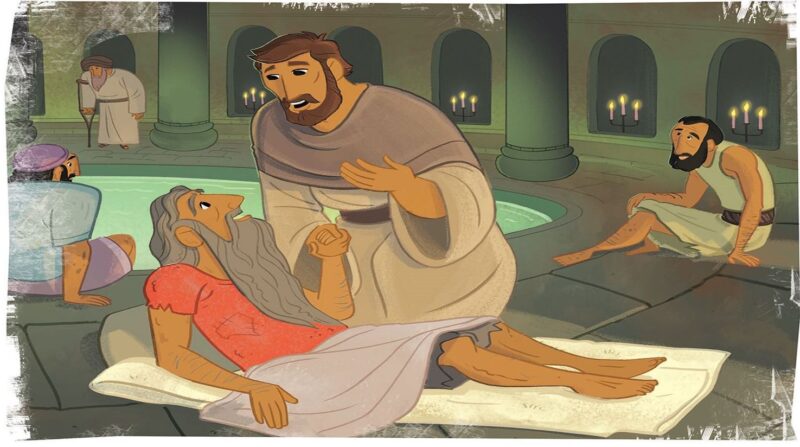