Jesus came to earth to show what God is like and to save people from their sins. This is great news! Jesus told His disciples to tell others about Him, and we are Jesus’disciples when we trust in Him. Everyone in the world needs to hear the good news about Jesus.

Jesus’ ministry had begun. Jesus taught people about God and His Kingdom. People started talking about Jesus and the things He was saying. They wanted to know more, so big crowds of people followed Jesus to hear Him teach. One day, Jesus was walking along the sea. He saw two brothers: Simon—who was called Peter—and Andrew. Peter and Andrew were fishermen. They were throwing nets into the sea to catch fish. Jesus said to them, “Follow Me, and I will teach you to fish for people!” Peter and Andrew dropped their nets right away and followed Jesus. Later, He saw two more brothers: James and John. James and John were in a boat with their father. The men were fixing their fishing nets. Jesus talked to them and they got up, too. James and John left their father and their boat, and they followed Jesus. Jesus traveled further, and He saw a man named Matthew, also called Levi. Matthew was a tax collector, sitting at an office where people paid taxes. Some people didn’t like tax collectors because they often took more money than they were supposed to and kept it for themselves. Jesus said to Matthew, “Follow Me!” So Matthew got up. He left everything behind, and he followed Jesus. Matthew had a big party at his house for Jesus and His friends. Tax collectors and other sinners came. The religious leaders did not think Jesus should be friends with people who did wrong things. They asked Jesus’ disciples, “Why does Jesus eat and drink with tax collectors and sinners?” Jesus heard the leaders and said, “People who are healthy do not need a doctor, but sick people do. I did not come to help good people; I came to help sinners turn back to God.” Later, Jesus chose 12 of His friends to be His disciples. That meant Jesus was going to give them a special job to do. They would work with Jesus and tell others about Him. These are the men Jesus chose: Simon (who was called Peter), Simon’s brother Andrew, James and John, Philip and Bartholomew, Matthew and Thomas, James the son of Alphaeus (al FEE uhs), Thaddaeus (THAD ih uhs), Simon the Zealot, and Judas Iscariot (iss KAR ih aht).

Christ Connection: Jesus came to earth to show what God is like and save people from their sins. This is very good news! Jesus told His disciples to tell people about Him, and we are Jesus’ disciples when we trust in Him. Everyone in the world needs to hear about Jesus. 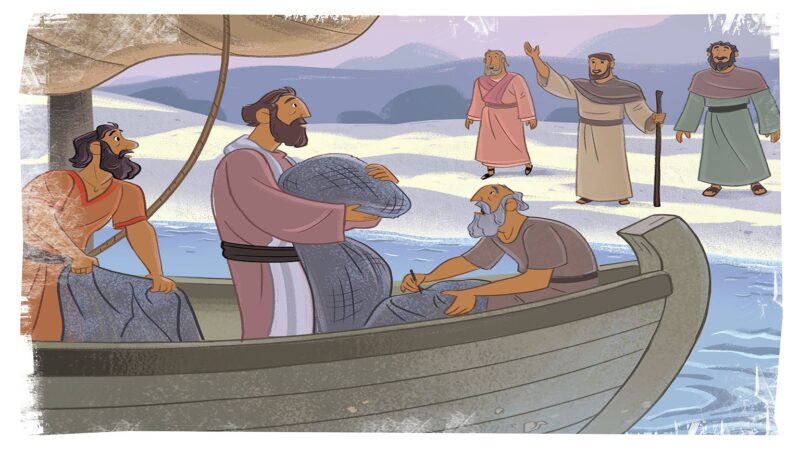