John the Baptist told people to get ready for Jesus, the promised Messiah. Now that Jesus was on earth, John’s mission was complete. Jesus was greater than John, and John joyfully stepped aside as Jesus began His earthly ministry.

Jesus and His disciples were in the countryside. People came to see them, and Jesus taught the people about God. Many people were baptized. John the Baptist was nearby. He was baptizing people too. Some of the people who followed John began to argue. John had talked about Jesus, so they went to John. “Teacher,” they said, “Jesus’ disciples are baptizing people, and people are starting to follow Him.” John answered, “I told you that I am not the Messiah. I am the messenger who goes before the Messiah to tell people that He is coming.” It was good that people were being baptized and following Jesus. That’s what they were supposed to do! Jesus is the Messiah God promised. John said, “Think about a wedding. When two people get married, the man who married the bride is called the groom. His friend stands with him at the wedding, and the friend is happy to be there and to hear the groom’s voice.” John also knew that a wedding is the groom’s special day. The groom’s friend should not make it about himself. This was how John felt—like a groom’s friend—and Jesus was the groom. John was happy that Jesus, the Messiah, had come. John said, “Jesus must become greater, and I must become less.” Why was Jesus more important than John? Well, John was from the earth, and he could only tell people about things on earth. Jesus came to earth from heaven, so He could talk about things in heaven because He had seen them! God sent Jesus to earth, and Jesus speaks God’s words. Everything Jesus says is true because God always tells the truth. God the Father loves His Son. He has given Jesus power over everything. Whoever believes in Jesus will live forever with God in heaven, but whoever does not believe in Jesus will not live forever.

Christ Connection: John the Baptist told people to get ready for Jesus. Now Jesus was here, and John’s job was finished. Jesus was greater than John, and John was happy to step aside for Jesus to begin His work. 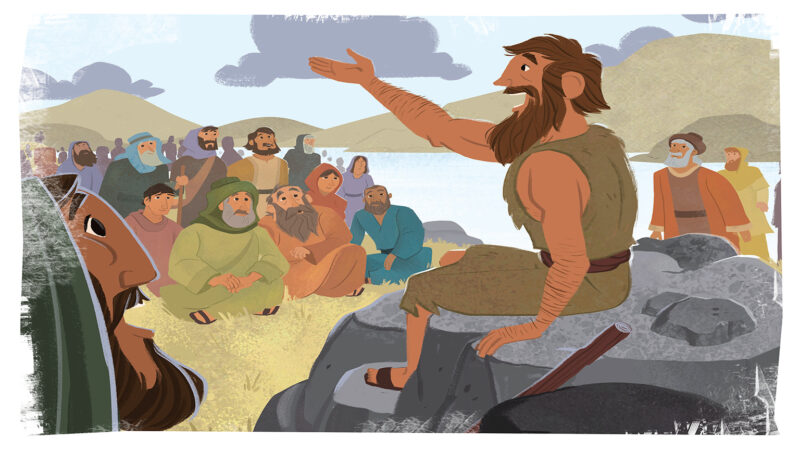